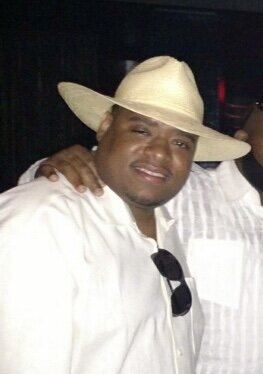 Please share a memory of Jerry to include in a keepsake book for family and friends.
View Tribute Book
Jerry Paul Pinkston, affectionately known as Pink, was born August 29th, 1978, to Terry Johnson. He was educated in the Camden City School system and graduated from Camden High School in 1996. Upon graduation, Jerry worked at the Camden Aquarium. He started his career as a Corrections Officer at Riverfront State Prison in 1997 until his retirement in 2020 from New Jersey State Prison. Jerry met his Hunny Bunny Sharon Allen in 2001 and later married in June 2014. He loved to travel, cook, and play video games. You could easily find him in his apron on the grill or making his famous crabs and mussels. The family always looked forward to his succulence and fried turkey for Thanksgiving dinner. Jerry was a die-hard Philadelphia Eagles fan. He never missed a game, and you couldn’t tell him that the Eagles weren’t making the Super Bowl every single year. He was probably the first fan at the Super Bowl parade in 2018. Jerry loved entertaining and hanging out with his Riverfront family. He was the proud papa of his dogs Mocha and Jynxx who were by his side 24 hours a day 7 days a week. They are going to truly miss him. They already do. Jerry was predeceased by his grandmother Archietta Pinkston, grandfather Paul Pinkston Sr. and uncles Paul Pinkston Jr. and John Pinkston. Jerry leaves to cherish his memory his wife Sharon (nee Allen), his mother Terry Johnson, sister Kerry Johnson, uncle Andrew Pinkston, stepdaughter Shanelle Allen and her 2 children Eva and Drew, brothers-in-law James Allen Jr. (Tracy), Christopher Allen Sr. (Deanna), close friends Fred and Kim Lawson, Mark Collins & Lazet Watson, Troy Mills, Andres Rivera and Timothy Washington, and a host of other family and friends.
Tuesday
31
May

Share Your Memory of
Jerry
Upload Your Memory View All Memories
Be the first to upload a memory!
Share A Memory
Send Flowers
Plant a Tree