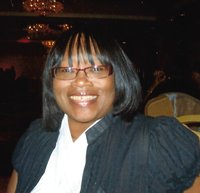 She was born January 24,1954 in Camden, NJ to Elizabeth Palmer and the late Robert E. Palmer the youngest of two siblings.

Katherine was saved at young age and walked with the Lord throughout her life. She enjoyed playing gospel music every Saturday morning, and would always start with the same song, “Rough-Side of the Mountain” followed by “Hold My Mule” (I feel like praising praising him).

To know her is to love her. Katherine or “Kat” was known for her infectious smile, fun-loving personality and the gift of gab. Her grandmother referred to her as “chatty Kathy”. She was always the life of the party and dressed to impress. She loved dancing and always made sure to have a partner to do “the Bop”. She loved being a mom and grandma.She loved quality time with family, from playing board games, cards, or just laughing and joking. She loved shopping, watching movies, and eating crabs. She would enjoy weekend shopping trips and 500 rummy matches with her mother and daughter.

Katherine was an amazing, mother, wife, and friend. She was devoted to her family. She enjoyed traveling, especially to the different places her son was stationed all throughout the world while serving in the Marine Corps, from Okinawa, Japan to Kailua, Hawaii. She also enjoyed traveling with her best girlfriends. She was always supportive and was her childrens biggest cheerleader. Katherine adored her grandchildren and especially enjoyed spoiling them. One of her favorite sayings was, “Whatever my grandbabies want, grandma going to get.”

Katherine graduated from Camden High School in 1972 and later graduated from Glassboro State (Rowan) with a BS degree in Communications and Psychology in 1976.

In 1976, Katherine married St. Ledger Francis. From this union her two children Tyron Francis Sr. (Rhode Island) and Treacy Weal  (New Jersey) were born. In 1989 Katherine was later remarried to the late Benjamin Rouse for 8 years where she moved to New Ellenton, SC in 1990.

Two years after graduating college in 1978, Katherine worked as a Computer data coordinator for RCA-GE corporation in Deptford, NJ for 12 years. Upon relocating to South Carolina in 1990, Katherine was employed by the Aiken County Department of Social Services as a Case Manager of Human Relations. In 2000, Katherine moved back to NJ, and began working at the Vineland Developmental center in 2005 as a Behavioral modification program technician, where she later retired December 2016. After retiring, Katherine worked with her daughter and helped her start her own daycare business.

Katherine was a member of the Ladies of Black Rose founded in 1983, where she served as president of the foundation for quite some time. This group of women were great friends and would get together to plan and hold different events throughout the community.