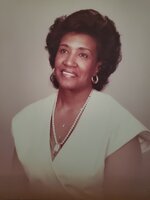 A Portrait of Dedication and Service Barbara L. Brown, was born Barbara LaQuita Taylor, on August 20th, 1938, to the late Samuel Taylor and Effie Buffins, in Sunflower, Mississippi. She was born in Mississippi, while her parents were visiting with family. After her birth, the family returned to their home in Birmingham AL, where she was raised with her sister Evelyn and brother, Samuel Jack. Barbara was gifted with an aptitude for learning and a beautiful singing voice. She attended Jefferson County Schools and was very intelligent. So much so, that she graduated from Hooper City High School, in June 1955, before her 17th birthday. Shortly after graduating high school, Barbara moved to Buffalo, NY, where she began her adult life of service. She loved helping others, especially children and those in need. In June 1957, she successfully completed the Nursing Aide Program at Millard Fillmore Hospital, Buffalo, NY. It was during this time, that she began her singing career, and met and fell in love with the late, Charles Alfred Brown, affectionately known as “CAB”. In 1960, the two relocated to Philadelphia, PA. From their union, they were blessed with a daughter Kimberli Aleisha, in 1966. She was also blessed to help raise two step-daughters, JaLissa Darcel and DaVeena Marie. In Philadelphia, she continued singing under her professional stage name “Kim Brown”, headlining as the featured singer with Lee Andrew and the Hearts, and as one of the opening acts for Maynard Ferguson and the Count Basie Orchestra, in Atlantic City, NJ. Her singing career also crossed paths with Etta James, Billy Paul, and the Bluebelles. In addition to singing, in 1969, she was trained as a counselor, with the City of Philadelphia, and joined Safe Streets Inc, Philadelphia, PA, a non-profit, anti-gang program designed to reduce gang violence, and provide social services to juveniles. She became one of the first black female counselors with Safe Streets, Inc, gaining the respect of gang-members and colleagues. In 1971, she transitioned from Safe Streets Inc, to the Juvenile Detention Centers, Philadelphia PA, that served to rehabilitate juveniles in half-way houses, including Sleighton Farm School, Glen Mills, PA. In the late 70’s, she also made the selfless decision to devote her life to raising her daughter as a single parent, leaving behind her professional singing career. Although she left her professional career, she still enjoyed singing in the church choir at The Church of the Redeemer Baptist, and as a member of Mt. Carmel Baptist Church. Many in the local music community continued to recognize her contributions, as Kim Brown. In the 1980’s, she transitioned from the City of Philadelphia, to the Commonwealth of PA, with the Bensalem Youth Development Center, as a counselor / educator, where she continued to help the youth. In 2000, she retired from the Commonwealth of PA, but was not finished serving, as she felt she had more to give. In 2005, she returned to the work force as a Teachers Aid for the School District of Philadelphia, at the Delta School. Over the next 10 years, she assisted special needs children with computer skills, until 2015, when her health would no longer allow her to do so. Barbara had a love and zest for life. She loved to travel and spend summers with her daughter at the beach in Wildwood, NJ. She instilled her love of travel and the beach in her daughters. To this day, JaLissa, DaVeena, and Aleisha, love being near the ocean. Throughout her life and careers, she had a tremendous impact on people that she met, counseled, and mentored. One of her many talents included sewing and she made various outfits, suits, and dresses, over the years, for herself and daughter, including two prom gowns. She had a special gift for making everyone she met feel important and loved. Throughout her multiple careers, if she were here, she’d say that her most important accomplishment was raising her daughter – never missing a teachers’ conference, concert, event, or graduation through Grad School. Trailblazers are not made, they are born. Barbara “Kim” Brown was a trailblazer, in music, and local/state government. She was lifted up by those that came before her, and in turn, she lifted others up, and made the path clearer for those that followed. May her memory, be a blessing. Barbara leaves to cherish her memory: Loving Daughter, Kimberli Aleisha (Brown) Barcus [Edward], Berlin, NJ; Loving Sister, Evelyn T. McDonald, Birmingham, AL; Loving Brother, Samuel Jack Taylor (Rosie Lee), Annapolis, MD; Loving Stepdaughters, JaLissa D (Brown) Henderson [Joe A.], Buffalo, NY; and DaVeena M (Brown) Clark [late, Michael], Houston, TX; and Loving Stepson Dr. Charles A. Brown [Toni], Houston, TX; nieces, nephews, loving grandchildren, and friends.