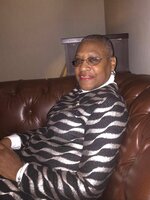 Jacquelyn Hall Myers was born September 22, 1951. She was the second daughter born to Callie Alberta Hall and the late Earnest Harris. She was then adopted by the late Leroy Hall. On Wednesday, November 24, 2021, God came to pick one of his flowers and he chose the most beautiful one, Jacquelyn, who now resides with the best. Jackie was educated in the Philadelphia Public School system where she graduated from John Bartram High School in 1969. She received her degree in culinary arts from The Restaurant School at Walnut Hill College. Catering was part of her training. The title sous-chef was the result. Jackie was also a licensed cosmetologist. Jacquelyn worked at Bell Telephone/AT&T for 22 years where she would meet her husband of 34 years, Monteo Myers. She then operated and owned "Jackie's Summertime Funhouse & Daycare Center" for 16 years. Jackie was an avid film lover, who also enjoyed traveling, cooking and spending time with family. Jackie was a loving and giving person who loved her family dearly. She will always be remembered for her welcoming smile and beautiful personality. Jackie was preceded in death by her sister, Carolyn Hall and leaves to cherish her memory: Her loving and devoted husband Monteo Myers, her mother Callie Alberta Hall, two sisters Beverly Dandridge and Denise Hall, numerous nieces and nephews, two goddaughters, Alexis and August, a host of in-laws, uncles, aunts, cousins, and many friends.