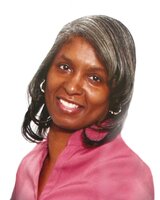 Bernice Arletta Theresa Davis (nee Brown) was born, the seventh of eight children, to Gloria and James Brown, Sr. on January 26, 1963 in Washington, D.C. Early in the morning on November 2, 2021, after a courageous battle with cancer, Bernice entered into eternal rest surrounded by family and love. Bernice spent the first twenty years of her life in Southeast Washington, D.C. After graduating from Ballou High School in 1981, Bernice entered the work-force and soon after met the love of her life and then future husband, Leonard E. Davis, Sr. In February 1983, Bernice and Lenny started their family with the birth of their son, James Vincent. In April 1984, they moved to Atlantic City, NJ and set their roots in the sand. It was in Atlantic City that their families blended—with Bernice gaining two children, Tamikka and Leonard, Jr., and where they would expand this family. In January 1985, Bernice and Lenny welcomed their second child, Dwahn, and in March 1989, their family was completed with the birth of their son Darnell. In 2010, Bernice became caregiver to her husband, something she did with love and enthusiasm daily. Bernice’s dedication to her family was endless, even with a 34-plus year career at Resorts International Casino Hotel. She began as a Box Office representative, then moved into the marketing department as a Marketing Representative. After some time, she was transferred into hotel operations as an operator and eventually served as a Casino Services Representative. While working for Resorts, Bernice also spent thirteen years as a part-time Customer Service Representative for Greyhound (2007 - 2020). In case you missed it, this amazing woman was at one point working a full-time job, a part-time job, and serving as a caregiver to her husband. Bernice’s world centered around her family. Her greatest titles were wife, mom, and grandmom. She became quite the barber over the years, with her boys often the guinea pigs. All of Bernice’s children came to love getting haircuts from mom after a while. After years of trial-and-error haircuts on her boys, her husband gave in and allowed her to cut his hair, too. Bernice was very possessive, in a good way, when she referred to her family. She would call her husband “MY Baby” and her sons “MY boys,” or when referring to her sons individually, “MY Vincent, MY Wahn, MY Nell.” In June 2012, the love in her heart expanded upon the arrival of her “boom boom,” also known as Olivia. Bernice also shared a special mother-daughter like relationship with her niece Melodie. Bernice always looked forward to the annual Brown Family cookout. When Bernice used the word family, it did not only mean blood relatives; family also included lifelong friends like her Southeast Golden Girls (Marianne, Robin, Michelle, and Davida). These were people with whom Bernice had an unbreakable bond—one that was over 45 years in the making. During her 37 years of living in Atlantic City Bernice shared many family-like bonds with her Resorts family (Shirley, Sunaina, Liz, Mo, Shanece, Ramona, Phyllis, Stephanie, James, Jacques), her Greyhound family, and a special group of ladies who met weekly for fellowship and fun. This group included Valinda, Iris, Lisa, Rose, and Donna. She also played hair stylist for one friend, Michelle E. Bernice shared a very special relationship with all of her in-laws, especially her sisters-in-law. With each one there was a special bond and love shared that will be cherished forever. Somehow Bernice made time for and enjoyed watching sports. She was a die-hard Washington sports fan, including the Washington Football Team (formerly the Redskins), the Washington Wizards, the Washington Nationals and the Georgetown Hoyas. She had been known to root for the Yankees as well as Duke University basketball, especially when her nephew played for Duke. Some of her favorite past times included gambling at the casinos and eating crabs. Bernice could eat a bushel of crabs by herself, which she did on many occasions. Bernice was predeceased by her parents, James and Gloria Brown; brothers Joseph, Benjamin, and Andre Brown; sister Valencia Brown; grandparents Howard & Mary Brown, Pearl Holloway, and Samuel Griffin; mothers-in-law Barbara Ringgold and Betty O’neil; fathers-in-law Venson Byers and Raymond Ringgold; brothers-in-law Ronald Davis, James Davis, Arnold Davis, Stanley Davis, and Dwayne Byers; and sister-in-law Debra Brown. Bernice leaves to cherish her memory and legacy her husband of 33 years, Leonard; children James “Vincent” (Taiwan), Dwahn, and Darnell; bonus children Tamikka Hamlett and Leonard Davis, Jr.; grandchildren De’nisha Davis, Demetria Hamlett, and Olivia Baskerville-Davis; great-grandson Alexander Navarette-Hamlett; brothers, Jeffrey “Darnelle” (Sadie) Brown, William (Felicia) Brown and James Brown, Jr., all of Washington, D.C.; brothers-in-law, John Arrington of New Jersey, Abdullah Muhammad of Newark, New Jersey, Kashif Muhammad of New Mexico, and Tony Jones of Arizona; sisters-in-law, Brenda Sanderlin of Pleasantville, New Jersey, Carol Neal of Fort Lauderdale, Florida, Floretta Davis and Michele Davis, both of Atlantic City, Shirley (Hassan) Slatton of Sicklerville, New Jersey, Venell “Bunny” Byers of Camden, New Jersey, and Michelle Davis of Egg Harbor Township, New Jersey; and a host of nieces, nephews, and other family and friends.