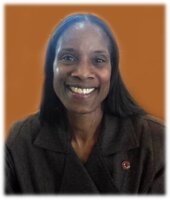 We have lost our dear mother, sister, aunt and friend. Kim Robinson was born September 4, 1963 in Philadelphia, PA and was raised by the late Walter and Corean Williams. Kim grew up in Philadelphia and was educated in Philadelphia School system. As a young girl, Kim was very vibrant, outgoing and independent. She worked and relocated to New Jersey. She had accepted the calling of the Lord on her life. Kim joined Voice of Deliverance New Covenant Church (VODNCC) in 1999. Minister Kim was a faithful and dedicated member and served in many ministries at VODNCC. She served as the Head of the Women’s Ministry, Armour Bearer Ministry, and Daily Morning Intercessory Prayer. She also served in her church Prison Ministry, New Members class and New Deacon Training Class. Minister Kim served faithfully in her church until she began to experience a decline in her health, but not in her spirit. Kim was an ambitious woman. She enrolled and took a few college courses. She enjoyed laughter, movies and the life journey she was experiencing. On September 03, 2021, God called her home to be with Him in eternity at age 57. She is preceded in death by her parents; Walter Williams and Corean Williams, Stephen Robinson. Kim leaves to celebrate her life, her son; Dwight Bailey, twin sister, Karen Robinson, Gerald Robinson, Charles Robinson, Betty and Nina Williams. A host of other precious nephews, family members, colleagues, associates and friends, who will miss her dearly.