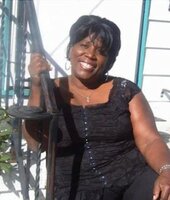 Judith Sharp was born on July 9, 1950; the 5th of 8 children to the late Albert G. and Martha S. (James) Sharp in Philadelphia, Pennsylvania. She departed this life on August 27th, 2021 at Jefferson Washington Township Hospital in Turnersville, New Jersey. Judy was educated in the School District of Philadelphia. Upon graduating, she worked as a Secretary for Sears and Roebuck for 15 years. After leaving Sears and Roebuck, she trained and worked as private duty Nurses Aide in Geriatrics Home health care service at the Ullman Agency in New Jersey for many years. She enjoyed caring for the elderly; It was her life’s passion. Judy met and married the late George Hill, Sr. in 1971, who preceded her in death and from that union, birthed one son, George Hill, jr. She also had one biological daughter, Kenyatta Wilson and one step-daughter, Regina Hill to cherish her fond memories. Judy was adored by her family, was a giver, a kind spirit and would always have a joke to make anyone smile. She loved to laugh, had a beautiful voice, enjoyed singing, and was a member of the Band, “George Hill and the House Rockers”. She was an excellent impersonator too. In addition, Judy was raised in the church and later led an Outreach Ministry that preached the Gospel and fed countless homeless people, who accepted Jesus Christ as their Lord and Savior along with Tom and Judy Wilson at the Benjamin Franklin Parkway in Philadelphia. In 2016, she became a member of Christian Harvest Worship Center and served as a Prayer Warrior. One, who prayed tirelessly for God's people world-wide. Judy was preceded in death by a step-daughter, Denise Hill; four siblings: Ernestine Palmer, Grady Sharp, David Sharp and Ida Young. Judy leaves to cherish her loving memories, a devoted daughter, Kenyetta Wilson; a Son-in-Law, Lance, Sr. of Collingswood, New Jersey; Her only son, George Hill, Jr. of Sicklerville, New Jersey; Step-daughter, Regina Hill of New York, NY; six grand-children, Shala, Judith, Kenton and Lance, Jr; Valerie and Niesha; six great-grand-children: Tyifys, Nyah, Kenyetta and Daquan; Ivriahna, Alashia and Zamier. Three sisters, Martha McCain of Sicklerville, New Jersey; Patricia Spence of Philadelphia, Pennsylvania and Jeanette Dupree of Sicklerville, New Jersey; a host of nieces and nephews, who truly adored her; a host of other relatives and friends; and a special friend Andre Street. Lovingly Submitted, The Family