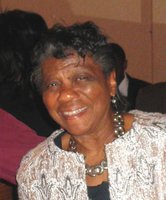 Lorraine Delois (Farley) Barrow was born to John and Laura Farley in 1934 in Atlantic City. Her younger brother John is deceased. After high school, she went to nursing school at the University of Pennsylvania and also married her sweetheart, Malcolm E. Barrow of New York City in 1953. They settled in Atlantic City in the 1950’s and started their family. While also working, Lorraine went back to school and completed her RN (Registered Nurse) studies. She continued as an RN at a number of medical facilities in Atlantic County including Atlantic City Hospital, Shore Memorial Hospital, Linwood Convalescent Center and Our Lady’s Center for Rehabilitation before retiring, to name a few. Her medical career also included supervisory positions. She and the family moved to Pleasantville, New Jersey around 1966. Lorraine “Mother Barrow” was a faithful member of Westminister Christian Fellowship Center in Atlantic City. She served on the Ministerial Staff, taught Sunday School and was the head of the Nursing Home Ministry for 25 years at the former King David Nursing Home and Eastern Pines Convalescent Center. She raised her children to respect and worship God and his word, the Bible. She also influenced many others to love God and align their lives with his word. She had great joy in serving God and it was her life. But, she was also known for her gardening, her spirit of hospitality and her medical knowledge which she readily would use to benefit others on and off the job. She would make herself available for any medical emergency during spiritual gatherings. As a testimony to this, in 1996 the Camden County Board of Freeholders presented her with the African American Women’s Network Award for outstanding service in the field of health. Lorraine is survived by her two children, Laurel Mukinayi and Derrick Barrow; two grandchildren, Jason Barrow and Alissa Barrow; two great grandchildren, Jayden Barrow and Gianna Barrow; in-laws, Mita Barrow, Jeannette Barrow and Sona Kalola; nieces and nephews, Philip, Ann and Donna Travers; great-nephew, John Thompson; cousins, Laverne and Vernon Smith; and lots of other loved-ones. She will surely be missed by too many to mention here.