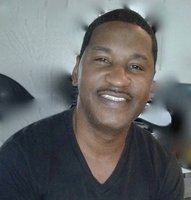 Shawn Laval Hawkins was born to the late Elder Ruben Alton Hawkins and Lula Taylor-Hawkins on March 26, 1967 in Jacksonville, FL. Shawn was one of ten (10) children: five (5) sisters; Altonnette Hawkins, Donna Jones (Pastor Keith), Patricia Gandy (Bishop John, R.), Allison Boren, Pearl Hawkins and four (4) brothers; Ruben Hawkins, Jr. (Banetta), Randall Taylor, Corey Hawkins Lamont Hawkins (Stephanie). Shawn is predeceased by his father, Ruben, Sr. in 1996 and older brother Lamont in 2010. Shawn was an avid lover of all sports and his favorite football team was the Tennessee Titans. Shawn was also very artistically inclined and loved music, fashion, poetry, and the visual arts. He was a prolific writer with journals filled with poetry and wrote several unpublished books. Shawn loved to sketch, paint, and draw and share his works of art with family members. Shawn’s love for clothes and fashion was legendary, he was always known for his unique swagger, dapper style, fresh cut, and signature sunglasses. Throughout his life, he fully embraced his God given talent in the arts, style, and fashion. All who encountered Shawn knew that he had a heart of gold and great humor that would light up the room. In his playful banter, he developed nick-names for family members who came visit frequently. His Great Uncle-In-Law Robert (Sharon) was known as “The Godfather” and his son, Jamal, “The Professor.” In his younger years, Shawn and his Uncle Anthony were known for their playful antics and joyous times spent together. Shawn has great comedic timing and was always known for sliding in a joke or comment that would have everyone laughing instantly. Shawn married his childhood sweetheart, Monica S. Hawkins on August 5, 1995. Out of their love came four (4) daughters; Shanique, Indya, Asya, and Alexis, and two grandchildren, Nero and Lyric. Shawn adored his wife, children, and grandchildren. Those close to Shawn knew that he was a quiet yet mighty force that was fiercely protective of his family. He leaves behind his wife, children, grand children, mother, siblings and a host of family members and friends.