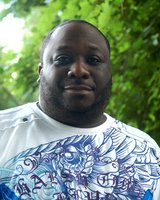 Deron Allen Thomas was born on September 4th, 1973 to Frank and Pauline Bethea Thomas. He was raised in West Philadelphia where he attended school and later graduated in 1991. During his earlier years, Deron was a member of the Church of The Living Christ on Cedar Avenue, under Pastor Alex and Annie Pearl McNeal. Deron worked in Philadelphia with his father and continued to gain employment at such establishments as Breyers Ice Cream and the Sun Oil Refinery. Deron enjoyed riding motorcycles, sports cars, and spending time with family during the holidays. He relished sharing family stories and enjoyed a hearty meal! In 2010, Deron moved to Williamstown, New Jersey and later Sicklerville, New Jersey to be closer to his aging mother. During that time, he frequented Lighthouse Pentecostal Church of Sicklerville, New Jersey. After a brief illness, Deron passed away the evening of May 16th at Jefferson Hospital in Washington Township, New Jersey. Deron is survived by his two sons, Dimere Thomas and Damar Conner, their mother Linda Conner, a grandson Khaziere Conner, a god daughter Mercedes “Poodie” Walker as well as his remaining uncle, James (and wife Mattie) Bethea. Deron was also blessed with a host of family and friends.