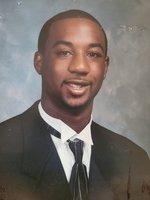 Jayson David Hargett was born on July 25, 1989 to Joan and Jesse Hargett at West Jersey Hospital in Vorhees, NJ. He grew up in Sicklerville and attended school in the Winslow Township School District. The family moved to Williamstown, NJ in 2004 where he attended and graduated from Williamstown High School in 2007. Jayson attended Camden County College and Philadelphia Community College. He moved to Jacksonville, Florida in 2017 to attend Florida State in Jacksonville to pursue a career in Radiology Technology. Jayson was baptized and accepted Christ at an early age. Jayson was known by many as “Swerve Superd”. He LOVED his family and his friends became our family. There were some nights when many of them slept on the floor or couch on Eastmont Lane and Horseshoe Lane. In 1999, Jesse and Greg Tobias started New Vision Basketball Association (NVBA). Jayson was one of the original players and was proud to be playing with his dad as his coach “Coach Jesse”. Jayson led a very special life and was always the life of the party. He was known for his humor, kindness, generosity, and loyalty. He was loved and will be missed by all. Jayson David Hargett leaves to cherish his memories grandmother: Maggie Robinson “Mom-Mom”, parents: Jesse and Joanie Hargett “Mama Jo”, brother: Jalim Robinson (Selena), sisters: Stephanee Hargett and Shawn Only (Ron), niece and nephew: Jalynn Robinson and Shamire Johnson, a beautiful daughter: Journee Sarayah Hargett and a host of relatives and “brothers-in-love”.