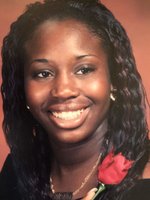 Ayana Elise Conway was born on November 11, 1985 to Derrick A. Conway and Dorothy Wyatt Youmans. She was a wonderful gift to the both of them from God. Ayana departed this life on February 18, 2021 with her family by her side. She enjoyed life and particularly loved doing hair and buying shoes. Yana as she was dearly known to her friends and family was not short on words. She was particular. No matter what her children's outfits had to be matching and not a hair out of place. She was very particular about how they looked. Ayana was baptized at St Joseph's church in Beverly, NJ on February 23, 1986. She also received first communion and confirmation at St. Peter's Church in Riverside, N.J. Yana loved people and if she knew you were in trouble, she would move heaven and earth to fix it. Ayana attended St Peter's school in Riverside, N.J. and graduated from 8th grade in June 2000. She attended Delran High School in June 2004. She pursued a career in cosmetology and hair styling, Which she loved. She attended Delran High School and graduation in June 2004. She pursued a career in cosmetology and hair styling, which she loved. She attended Burlington County Technical School and graduated with a certificate in Cosmetology in July 2006. Ayana also attended National Paralegal College and completed one year of study prior to her illness. Ayana did not let nothing stop her. She continued to do things with her children and continued to press on with her daily living up until her death. Yana is survived by her four children: Julian, Alivia, Avery, and Jayceon; mother Dorothy Wyatt Youmans and step father Barry Youmans, five brothers: Corey, Nathaniel Jr (Geraldine), Lamont, Dominique (Tiffany) and Isaiah; one sister Aleyah; her Godmother Yvonne Weston Moss, her favorite Aunt Kahleelah Lowenthal, her favorite "Uncle Cookie" Reggie Conway (Cathy); her Great Aunt Shirley Conway, her favorite cousins Jo, Bandeu and Angelica, her loving nieces and nephews: Xavier (Desiree), Qwik, Nevria, Nate III; Abby, Zach, Nysir, Victoria, Alan, Brianna, Lance and Vaughn; special friends Christine Booth, Vinnika Cushion Alford, Aspen Thomas, Gwen Williams, "TT" Tyona Riles; and a host of uncles and aunts, friends and other family.