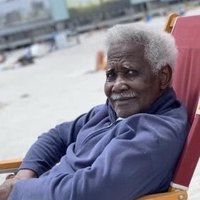 Norman “Lil' Boy” Harley was born to the late Jack and Allean Harley on February 12, 1934 in Bennettsville, South Carolina. He was the fourth of eight children. Jack and Allean moved their family from their homeland, leaving the tobacco fields of the South to travel to Philadelphia, Pennsylvania in 1947, with a keen understanding of hard work. Norman’s journey led him to meet Anna Ruth Williams and on November 22, 1954 they were married. From their union nine children were born creating a great legacy they cherished. Although Norman did not complete a formal education, he excelled because of his work ethics. He learned from others in the construction trade and advanced in the field, from a laborer to a brickmason. His involvement with many areas of the construction field caused him to settle with becoming a roofer. His integrity opened doors, so much so that his brother, Robert, convinced him that together they could start their own roofing business. N & R Roofing was birthed in 1971 and grew beyond their imagination. N & R Roofing Company became one of the most successful minority roofing businesses in the City of Philadelphia in the 70’s. Numerous roofers attribute their success in the business to Norman Harley’s wisdom and patience in teaching them the trade. He continued roofing up to 82 years of age, and even after that, would occasionally accompany his son Dariel on a roofing project. Norman loved his family. At times he had to be encouraged to come out of his room during family gatherings, and once he did, he would enjoy eating, dancing and laughing. You would hear him saying, “let the good times roll." He spent time with his grandchildren and great-grandchildren, encouraging them to “be good.” And boy, oh boy, did he like cars. He would spend evenings wiping down his trucks after a hard day at work. Everywhere he lived, he would also make sure the streets were cleaned by picking up leaves and washing down the sidewalks. In recent years, he embraced traveling. He savored road trips, particularly to his roots in Bennettsville, South Carolina where he would often tell the stories of his family working the tobacco fields and others who worked the cotton fields. He enjoyed riding and listening to the “oldies” and reflecting on his life. He would encourage family members to take him to the beach to sit there and and enjoy the moment. He accepted Christ as his personal Savior and was a member of the Lighthouse of Deliverance. Norman was affectionately known as “Pop Harley.” He would sit on the second row, clap off-beat, grin widely, give an occasional high-five to a nearby parishioner and often reflect on his life - his family, work and God. Norman was preceded in death by his parents Jack and Allean, his sisters and brothers: Ella, Lucille, George, Robert, Nate, John L., and Lucius, and his daughter Darlene Byrd. He leaves a great legacy to cherish his memory, his wife of 66 years Anna Ruth, his 8 children: Norma (Clarence), Anthony (Donna), William (Veronica), Norman (Roneta), James (Rebecca), Richard (Delores), Zachary (Charlene), and Terrance (Angelic), his son-in-love Robert, his bonus son Kenneth (Courtney), 36 grandchildren, 41 great-grandchildren, 2 great-great grandchildren, a close niece Betty Anne Taylor, and a host of nephews, nieces, cousins, family, church family and friends who knew him as "Grab".