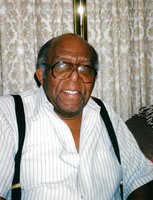 Robert William Leatherberry, Sr., age 89 of Atco, NJ received his wings and went home to be with the Lord on Friday, December 25, 2020. He was born January 15, 1931 in Atlantic City, NJ to Robert Johnson and Josephine Bush Leatherberry. Robert (aka Bob, aka Sonny) attended the Atlantic City public school system, and at the age of 17, in November of 1948, joined the United States Air Force. During this enlisted time, Robert was awarded the WWII Victory Medal. He met and later married his 1st wife Ruby Boyd on September 7, 1949. From this union were born 9 children. He married his 2nd wife Beryl Dickerson 11/30/1974 and they were married for 41 years until Beryl’s untimely passing on 11/30/2015. Throughout his working years, Robert was both a Bus Driver and a Tractor Trailer Driver, retiring from Machise Interstate Transportation (MIT). During his retirement years, Robert drove the bus for his local school district and co-owned and operated the Ebony Cab Service of Lindenwold with his wife Beryl. Robert has been a long time and dedicated member of Mt Zion AME-Kresson Church and maintained a close relationship with his Pastor, Reverend Gervine Bell and his “son in the Ministry” Minister Keith Worthington. Robert was an avid fan of old Western movies and had amassed a large collection of them on his laptop computer. He watched them faithfully every day. He also enjoyed listening to Gospel Music and had a number of favorite Gospel Artists that he routinely listened to. When not watching Westerns, and not listening to Gospel, you could find Robert hanging out in the Corridors at The Fountains with his buddies Charlie and Steve just “shooting the breeze”. On September 3rd of this year, Robert celebrated his 50th anniversary with AA. His longtime membership and commitment to AA was an accomplishment he was most proud of. He attended regular AA meetings for most of those 50 years. When he could no longer travel to attend meetings for health reasons, his team brought the meetings to him until COVID19 restrictions were implemented this year. Robert was predeceased by parents Robert and Josephine, wife Beryl, children Freda, Dennis, Sr., Bruce, Darnell Levine and Dean, his sister Laura, grandchildren Laquia Leatherberry, Derrick Brooks, Remanicia Watson and best friend Norman Strong. Robert is survived by two daughters, Deborah Brooks of Mays Landing, Vicki Lyman (Theartis) of West Berlin. Three sons, Robert, Jr. of Pleasantville, Duane (Patrice) of Egg Harbor Township and Gary Jeffries (Linda) of NYC. One sister Marion Dunn (Eldridge) of Piscataway, NJ. Fourteen grandchildren, eighteen great-grandchildren. His former wife Ruby Leatherberry of Mays Landing, dedicated friends Dan Marks and Claude Casper. A host of nieces, nephews, cousins and other loving friends. Come to me all you who are weary and burdened, and I will give you rest…. ---Matthew 11:28 Lovingly submitted, The Family