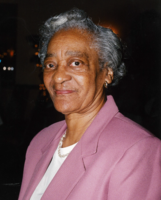 Laura Frances Kelly (known simply as Frances to many) was born on January 16, 1928 to Alvin Cornelius Lewis and Maggie Finney-Lewis in Onancock, Accomack County Virginia. She was one of twelve children and was a twin. Laura was a high academic achiever and attended an all-girls school in New York where she skipped a grade, then returned to Virginia to complete her schooling at Mary N Smith High school. Out of high school Laura relocated to Glassboro NJ where she met and married the love of her life Clarence Eugene Kelly. Together they raised 6 children. She remained in Glassboro for the majority her adult years. After raising her children Laura started working at Glassboro State College (now Rowan University) where she retired after 11 years of service. She loved her job and was known for her work ethic among her peers and superiors. Laura joined Bethel AME Church in Glassboro in 1950 where she was a long time member. She served on the Missionary Board, was the Head Stewardess, and enjoyed singing in the choir. She loved hymns and would often play her electric chord organ at home and sing Blessed Assurance. She rarely missed a Sunday of putting on her finest dress and hat and making her way to church to serve the Lord. Laura instilled her love for the Lord in her children, and the next three generations. When she wasn’t at the church, you could find her spending time with grand/great-grandchildren to whom she was affectionately known as Gran. She was the teacher, ensuring that you were learned in both academics and scripture, the cheerleader at dance recitals, concerts, academic and sporting events and the disciplinarian - correcting ones posture as she often referenced that she was called “straight goods” back home in Virginia. She stayed highly active - “ripping and running” as she would call it - well into her later years. In 2013 Laura relocated to Voorhees where she joined Bethany Baptist church under the leadership of Bishop David G Evans, where she remained a member until her passing. On September 24, 2020 God saw fit to bring his humble servant home to glory. Laura’s immediate family will remember her for her fast driving, her wit, and her desire to celebrate her birthday twice on the January 16th and January 24th as a result of a birth certificate error. Moreover, she will be remembered for her love of the Lord and for family. In addition to her parents Laura was preceded in death by her husband Clarence Eugene Kelly, son Bruce Kelly, son-in-law Bruce Walker, 5 sisters: Lorraine Joynes, Sarah Howard, Lottie Nock, Mary Lewis, Grace Lewis, 6 brothers: Leondis Lewis, Fred Lewis, Alvin Lewis, Leon Lewis, Joseph Lewis (twin), and Samuel Lewis. Laura leaves to cherish her memory her children Elsie Lewis, Martha Kelly-Walker, Clarence Kelly, Laverne (Donnie) Feliciano, and Jennifer Kelly-Winder (Ozzie), 14 grandchildren, 14 great grandchildren, 1 great- great grandchild, a host of nieces nephews and friends.